A simple distinction is sometimes made between ‘traditional’ organised crime and ‘modern’ organised crime. Like all distinctions it is easily exaggerated. Those who make this distinction are usually thinking along the following lines. On the one hand there is a type of organised crime exemplified by the traditional Sicilian Mafia and the Italian-American Mafia – also known as ‘La Cosa Nostra’ ('our thing', or 'our business') and by generations of Hollywood movie makers and American politicians as ‘the Mob’. These groups seemed to be:

On the other hand, of increasing importance in the modern world are the more flexible gangs and organisations which vary considerably in size, operating both locally and globally and which may be quite loosely organised through network connections between individuals or small groups and without any notion of hierarchy. Such groups are regarded as the face of modern organised crime and the typical example is that of drug smuggling networks. The members of these organisations can become very wealthy and powerful but their activity is focused overwhelmingly on the accumulation of profit.

Let us look briefly at the elements portrayed in the table above before moving on to look at two well known examples of traditional organised crime.

Traditional organised crime is usually based around family or wider family-led groups, it is rooted in established cohesive communities - either urban or rural - its members are oriented to power and status in these communities (based on fear and respect for strength and violence) as much as accumulating wealth. The activities or traditional organised crime tend to embrace, besides the usual criminal enterprise of protection rackets and trading in illegal commodities, such activities as settling disputes and protecting important or powerful groups within the community usually in the absence of an effective state machine able to perform these functions. The power of organised criminal groups is also enhanced by the weakness of other social and political organisations such as political parties, trades unions, employers associations, voluntary associations, local government agencies, which otherwise might act as a focus of mobilisation against the power of criminal groups, provide strong non-criminal identities and also perpetuate values such as democracy, tolerance, respect for law and human rights which undermine the respect for violence and authoritarianism which can enhance the status of criminal groups (including gangs) in the community.

More modern variants of organised crime, by contrast, are organised in a variety of ways. Criminal families may participate but alongside networks and groups of individuals who have 'gone into business' for some specific purpose such as drugs trafficking. Modern organised crime is less rooted in particular communities: its activities, again as exemplified by drugs trading, frequently have a global reach.

The main orientation is, furthermore,  focused on wealth accumulation and taking advantage of opportunities for profitable criminal activity on a much larger scale than local communities. Illegal drugs, loansharking or vice can be sold, protection rackets organised in various localities but there is much less attention to achieving respect and power in local communities based on such activities as dispute mediation. Local people will not be encouraged to bring their disputes and problems to prominent criminals to 'sort out'. Rather a certain amount of notoriety may function simply as a deterrent to local people collaborating with the law enforcement agencies and to encourage payment of, for example, protection money. Apart from this there will be a greater emphasis on clandestine operations. Elaborate measures will be taken to avoid the state authorities, to appear invisible to the police and to large sections of the community.  Attempts may be made to corrupt local police and other officials. But in general police and other social and political institutions will be stronger and will be a main focus for identity formation. If local people have problems they will take them to social services, the police or other appropriate agencies rather than a local fixer or 'Godfather.' Criminals will be therefore be most concerned to maintain clandestine, unobtrusive lifestyles.

These contrasts are 'ideal types'. In many situations elements of both traditional and modern will exist side by side. It is useful therefore to begin by looking at two examples of fairly traditional criminal organisations: the Sicilian and American Mafias


The contrast we have made in the table above should be taken very much as an approximation. There is a tendency for traditional forms of organised crime to become weaker over time and we shall give examples of this. We shall see how in the US the old Italian-American Mafia has been out-competed by newer, more flexible, groups originating in Latin America and other parts of the world. But traditional groups are still around and still very important. In Europe the Sicilian Mafia, one of the oldest forms of traditional organised crime, is still very powerful even though probably weaker than it was 50 years ago. Also, as some commentators argue (e.g. Woodiwiss), in the US both law enforcement agencies and criminologists were over-obsessed with the Italian-American Mafia and its traditional structure and therefore tended to ignore other types of more 'modern' organised crime which have in fact been around for some considerable time. 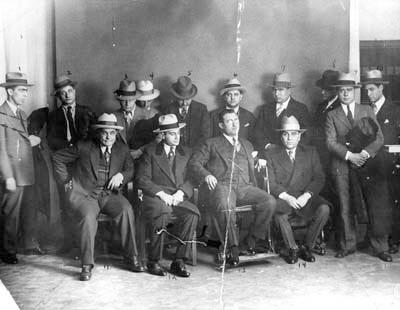 Mafia organisation: the role of the family

How was the traditional mafia organised? The system of individual power based on strong, violent individuals produced a specific form of organisation. Strong individuals would build organisations around them of loyal followers. The basic unit or social organisation in Sicily was the family. The social and political vacuum we have noted above meant that a sense of community was weak, as were collective organisations such as political parties or trade unions. Strong mafiosi would attempt to build up their families. Thus the organisation of the traditional Sicilian Mafia is an outgrowth of the family. What kept the organisation together was simply family loyalty. This bond of family and blood was far more important than ‘respect for the law’ which, as we have said, was a pretty distant institution. The centrality of the family was reinforced by the lack of other organisations such as political parties, trade unions, or voluntary associations which in more modern societies produce other types of allegience and identity. The group would be built up from this basis of family and the network of blood relatives, reproduced and strengthened by marriage, as the most important social organisation for mutual aid. ‘My family right or wrong’ is the basis to understanding how the mafia group held together. The point to be emphasised is that what held the mafia group together was what held most families together in Sicilian society. The centrepiece of this system was, for the mafia, loyalty to the strong man at the centre of the family, a respect for strength as more important than virtue, a willingness to avenge the honour of the family group irrespective of rights and wrongs. This attitude or form of loyalty was known by the Sicilian word Omerta. Strong mafia families would group together as a Cosca (group) a group of about 15-20 individuals. The network of blood relatives would be expanded by those granted membership, friends and clients for whom the family had acted and now owed loyalty in return.

The structure of the traditional Sicilian mafia was thus a decentralised network of families, each with a rule of local territory. There might be collaboration as family members engaged in activities to their mutual advantage. The mafiosi certainly did not think of themselves as criminals but as ‘men of respect’ as successful examples of the Sicilian way of life. But it is important to understand that they did not only substitute themselves for the law and the state but that they did so in a violent and criminal way. Even though some of the functions they fulfilled were those which a state would have to fulfil, they did it through the use of violence.

The Mafioso had to 'prove' himself (for example by committing murder) in order to become a full member of a Mafia family. The unsavoury qualities required of a Mafioso were succinctly summed up by a Sicilian legal official in 1879

The grade of Mafioso is required by giving evidence of personal courage; by carrying prohibited arms; by fighting a duel through whatever pretence; by stabbing or betraying someone; by pretending to forgive an offence in order to take vengeance for it at some other time or place... by keeping absolute silence regarding some crime; by denying before all the authorities and the magistrates the knowlege of any crime he has seen committed; by bearing false witness in order to procure the acquittal of the guilty; by swindling in whatever way (quoted in Dickie 2004: 69)

Dickie goes on  to quote the Rome correspondant of The Times, having read this and other material commenting with alarm that the Mafia appeared to be "an intangible sect whose organisation is as perfect as that of the Jesuits or the Freemasons and whose secrets are more impenetrable" (Dickie 2004: 69)

The family structure with its oaths of loyalty to the ‘Godfather’ made for strong cohesive powerful groups in the social conditions of nineteenth and early twentieth century Sicily. But they were quite different from the flexible ‘business’ arrangements of short term alliances which characterise more modern forms of organised crime solely oriented to making money.