Posted by Martin Ford on Tuesday, October 2, 2018 Under: Guest Security Articles
No one would ever call me a "techie." I still have challenges operating my Smartphone and sometimes out of utter frustration I feel like smashing it into a wall. But I realize that technology does-not-stand-still and I understand the value of embracing technology. In the security business, not all new high-tech "inventions" have proven themselves, but embracing technology is essential as it can often improve workflows, increase efficiency, and help leverage finite resources. 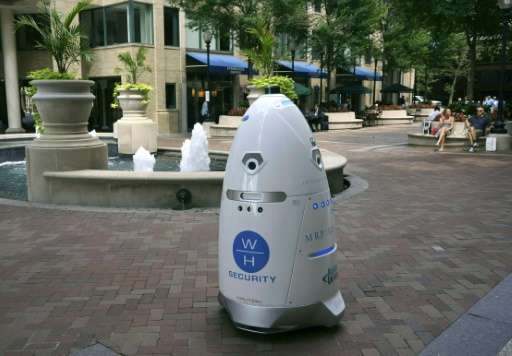 In today's fast-paced world there seems to be some newfangled security gadget or software coming out almost daily. I have been around long enough to become accustomed to scanners that read vehicle license plates. Facial recognition that can identify a known criminal or "trespassed" individual as soon as they enter a premise like a shopping center is common. And, proximity readers, magnetic card readers, and smart cards with embedded microprocessors are standard in many physical security settings.
Security Officers are a Costly Necessity
One of the biggest security costs to business is human security officers (guards). No one knows for sure, but it has been estimated that there are at least 2-million security guards providing guard functions in the USA. Even though the average security guard in the USA makes a salary of less than $12.00 per hour (some much less), when a business adds up the total hours and all associated costs, the total cost of security officers can easily be one of the biggest security expenditures.
Sophisticated surveillance cameras are common place in premise security but there is still a need for "human eyes" and many businesses do not have any real alternative to footing the bill for security guards. But recently several companies have created Security Robots! Could traditional security officers be replaced by robots making human security officers a thing of the past?
Security Robots are Already Here!
A number of different security robots have been developed and some are more sophisticated and capable than others. One of the latest is the manufactured by a California company and looks like a 300 pound, 5-foot tall sleek phallic shaped garbage can. It reportedly travels autonomously up to 3 miles per hour. This robot is a melding of technology - robotics, sensors, autonomously predictive analytics, thermal imaging, and maybe a few more technological "things" that the manufacturer has yet to publicly disclose.
Reportedly, this robot has the ability to scan 300 vehicle license plates per minute in a parking lot or structure. This is useful in detecting vehicles that are of concern to persons working at a premise like disgruntled employees, stalkers, or persons who have restraining orders prohibiting them from being at a premise or near certain employees. By identifying a prohibited vehicle on the premise, the Robot gives security actionable intelligence. A human security officer can receive instantaneous information from the Robot on a smart phone and respond to the scene and take appropriate action. The ability to know about a situation in real time gives a human security officer the ability to respond swiftly and hopefully resolve a problem before it escalates into violence.
Privacy Concerns
Some citizens have expressed privacy concerns over "Big Brother" robot watching their every move. But the reality is that they are already being watched by human security personnel, undercover store detectives, maintenance personnel, and high-tech surveillance cameras. And, anytime you enter a private facility, the facility has almost carte blanche authority to watch over your every move.
Security Robots to Augment Human Security
Will human security officers lose their jobs with the advent of Security Robots? The job of a security officer is sometimes routine and boring and human officers need to take breaks to keep physically and mentally alert. A Security Robot has no such needs. It just keeps going & going & going.
It is way too soon to know how security Robots will affect overall physical security strategies and practices as the technology is still emerging. Currently, security Robots are not designed or intended for intervention. Their role is to be a commanding or "authoritative" presence and act as a "look-out" and hopefully serve as a deterrent to nefarious activity.
Security Robots as a Force Multiplier
A human security officer can only be in one place at a time. The security Robot is a "force multiplier" in that a single security officer can instantly access all of the information collected by the Robot via a smartphone. When the use of Security Robots become more common place, their use will likely reduce the number of human security officers needed in many security venues. But, it will not replace all human security officers. The 'smart eyes, ears, and nose' of a security Robot can see, hear, and smell, but the Robot cannot take any actions based upon these sensors other than emit an alarm. It takes a human security officer to respond to the scene and determine the appropriate course of action.
Security Robots will likely change the role of a traditional uniformed security officer from what is often a "watchman" or security "monitor" to an incident first responder. When this happens, the emergency response responsibilities of a security officer will require more training and this increased responsibility and training will likely result in an increased recognition of the value of a human security officer. In time, this increased responsibility and professionalism should result in increased wages for human security "first responders."