Posted by Harold Smith on Tuesday, October 2, 2018 Under: Guest Security Articles
In the past few decades security peoples were hired to guard the areas. The owners and the organization invested descent amount for obtaining security. Still the world remained insecure. To cut lose this situation, electronic security systems are used to secure the world and to completely remove the darkness. 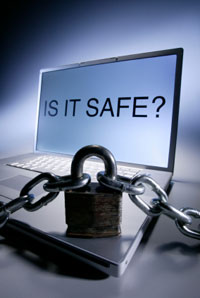 Initially the electronic security system didn't have much exposure due to the mentality that there is nothing equal to human beings. But due to various factors like fastest and easiest method of security, better security and cover larger area than human electronic security systems steadily gained popularity among the people. Several ways to keep up security systems that help to keep up safety in offices, homes, commercial places, financial sections and places that need protection from theft. Video surveillance cameras help to monitor the place keeping an eye for safety.
No place is safe today; it can face innumerable dangers of a terrorist attacks or natural disasters.
SCHOOLS
A school has a number of young children which makes it paramount that every school staff has an action plan to deal with any such eventuality.
Every school ought to have several exits leading to all the sides of each building. Should one exit be inaccessible there should be another alternative route out of the building. The standard evacuation drill for a building ought to be decided prior to an actual emergency situation. It is for this reason that evacuation drills are recommended for schools so that they can determine the time it takes to clear a building.
Evacuation is not only essential during a disaster, but also prior to it and after it. The clearing plan incorporates the following aspects:
AIRPORTS
At airports we have to respect very strict rules or the consequences can be very tricky. Many airports apply a strict ban on photographing and filming inside the airport and maneuvering areas. These prohibitions exist for security reasons. Even though they have nothing to do with the logic, you have to respect them if they are prominent because the consequences can be very tricky.
On some airports, for travel safety reasons, security guards can pay attention on a suspicious people and they have the right to allocate that people into the tunnels with increased security measures.
BANKS
Bank fraud, even though usually not a violent crime can play havoc on a banks profit and loss. It is a criminal scheme to deceive, trick or swindle banks and their customers. Fraud takes on many forms such as stolen, forged or altered checks. Upon check presentation, many techniques are used to distract and confuse the teller.
Con artists usually mimic an average customer but use techniques they feel will throw the teller off guard. A person who acts in the ways described is not necessary a forger. However, the teller is usually protected by following the bank procedures and reporting suspicious transactions to the supervisor.
Proper identification is the number one tool, in the fight against fraud. It's imperative that the teller ensure only authorized people receive bank funds. Giving money to the proper person requires identification of the person cashing the check. Once money is given for a forged or stolen check, it is usually impossible to recover the money.
So what do we do in a society filled with crime? The answer is to be vigilant in everything we do. Let us start in our home and in our schools where our kids are. They could be the starting point of change. And change is never too late for anyone.
Criminal acts may happen in different places, at school, at the mall or even at your own home. Criminals may come in different shapes and sizes; they may be young or old, male or female, black or white. But one thing is definitely true. Crime does not pay. Any crime committed will not go unpunished. They can go and get away with crime once but greed makes them come back for more and justice is always waiting for them in the end. Justice and punishment will be served.