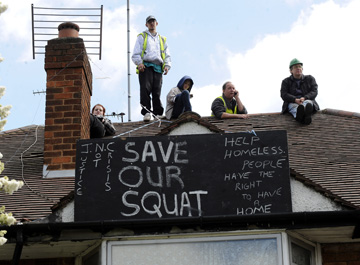 Definition of a squatter
First, some definitions. If your tenant decides not to leave when he should - for example, after the expiration of a Section 21 notice to quit at the end of a tenancy - they are not squatting, just a former tenant who won't leave.
To remove tenants like this, you'll have to serve the correct notices and then use normal court procedures. You can do this yourself without having to pay for the services of a solicitor. But it can take two or three months.
Real squatters are people who have no right to be in your property. Possibly your tenant has let them in (people not on the tenancy agreement) or they simply let themselves in while the property was left empty, unoccupied and unsecured. Strictly speaking, these people are trespassers, and actually there is no legal definition of "squatter". But they are generally regarded as such. And they can be tricky to remove. So how do you do it?
Removing squatters: the DIY approach
The good news is if a trespasser or squatter is in occupation, you are allowed to use self-help measures to get your property back.
The only problem is you'll have to somehow get into the property and change the locks and secure it. Whilst you can legally do this, you cannot use violent entry if one of the squatter is actually in the property at the time and opposes you.
Any squatter with half a brain will know this, of course, so they will have changed the locks and they will make sure that someone is guarding the property at all times.
Since many won't have (conventional) jobs, being in all the time is unlikely to be a problem for them.
If you try to get them out they will probably quote the relevant law, Section 6 of the Criminal Law Act 1977, and no doubt call the police and a friendly lawyer to stop you. 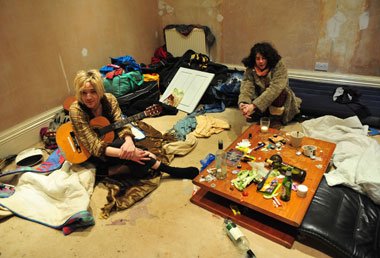 Removing squatters: court processes for trespassers
To counter this, you will need to use the special court process for trespassers which can be issued quickly - often the whole process can be done in three or four weeks.
(Note: An alternative interim order can also be used, but you still have to wait for a second order and there will two hearings, so most people opt for the special process for trespassers instead). The advantage of going to court is that you will only have to wait at most a month, and the occupiers will almost certainly go just before the bailiffs arrive, taking their stuff (or at least the stuff they want to take) with them.
Removing squatters: legal help for Protected Intending Occupier
If the property was your former home, or was somewhere that you were about to move into, then you have a right to get back in as a Protected Intending Occupier under section 7 of the 1977 Act.
If this is the case, you will need to prove it was your former home or that you have recently bought it and intended to move into it as your home.
You can do this by getting a written statement to that effect and have it witnessed by a solicitor. You would then go to the police and request their assistance with gaining re-entry and effecting the removal of the squatters.
You could also use the same approach if the squatters had gained entry while the property was empty between tenants and you have already got a tenancy agreement with new tenants in place.
In this case, both you and your prospective tenants will have to sign the written statement and have it witnessed by a solicitor, as before.
Removing squatters: what if my tenant let the squatter in?
If your tenant let squatters in (and assuming you did not allow your tenant to sublet), it gets rather more complicated.
If your tenant didn't say he was leaving - even if you suspect that he has definitely left and even though someone else is in the property - it's probably best to be safe and pursue the normal track court possession routes through the courts to get possession. In other words, you would proceed as if your tenant was still in possession.
This is because if you use self-help measures and the tenant then comes back, you will be in the wrong. In the absence of a court ordering possession in your favour, you will have to let him back in again, even if he owes you rent.
Possession orders are in effect made "against the world", meaning an order is valid against anyone who happens to be in your property, irrespective of whether they are named in court papers or not.
And if it goes as far as bailiffs coming to enforce the order, everyone who is in the property must leave.
Preventing squatting
Prevention is, of course, better than cure, so stop squatters moving in to your property in the first place. Keep your property secure at all times, especially between tenancies and before the completion of the conveyancing.
Windows should not be left open because with no evidence of forced entry, squatters cannot be treated as burglars. To avoid letting to tenants who up sticks and abandon a property to others, you have to rely on a thorough reference check, which should include a check with former landlords.
Don't underestimate the threat
There are lots of websites out there giving advice on squatters' rights, which goes to show just how easy it can be and how well organised some squatter groups are.