Posted by Joyce Miller on Monday, July 29, 2019 Under: Nightclub Security
SECURITY'S ROLE
The job of club security is to protect the club’s founder, inventory, employees and guests, as well as to prevent any criminal activity within the club, and to immediately notify the authorities of any wrongdoing.

If one of the employees is having an issue with a guest, you always side with the employee.
If the club has a Head Door Supervisor, he or she is the one who decides who gets into the club, that’s not the role of other security members, nor are they paid for that.
Nightclub security personnel
"Door Supervisors" are ordinarily responsible for keeping law and order at nightclubs, bars, lounges, entertainment venues, clubs, arenas, and casinos. While day time door security is in demand at all times at most places, nightclub security normally work the grave-yard shift.
Monitoring
People go to nightclubs to enjoy themselves. They want to have a few drinks, party with old friends, meet new people, and have a good time. Lots of people and alcohol is a recipe for trouble, and that’s why it’s important to have a high quality security crew. A good crew will track and resolve any potential problems, without a single spilled cocktail.
Front of House Door Supervisor
The role of a front of house Door Supervisor is to allow guests whose names are found on the list provided by club management. You will have received the guest list prior to the start of the evening and arrival of the guests.
The guest list consists of the names of people who are “friends of the club”. Or have tickets if it is an event.
If an individual is found on the guest/reservation list, you should allow them into the club. In the event that the management team decides to list each individual specifically, you are to allow only the listed individuals in for that reservation.
Sooner or later you will be offered cash from someone to let them bypass the line or to let them into the club, this is officially prohibited, and you can be fired for doing so. Some clubs tolerate this sort of protocol more or less, depending on management. There is no rule of thumb.
HISTORY OF CLUB SECURITY
Historically, bouncers have had the role of no-nonsense, ass-kicking, tough guys. But as times changed, so did the role of bouncers. In the late 20th century the role of bouncers transitioned to one of conflict resolution through communication and limited physical force. This evolution occurred in order to prevent lawsuits against bouncers by disgruntled guests. Furthermore, the title of a doorman can earn great respect, and has been regarded as an honoured and important position. 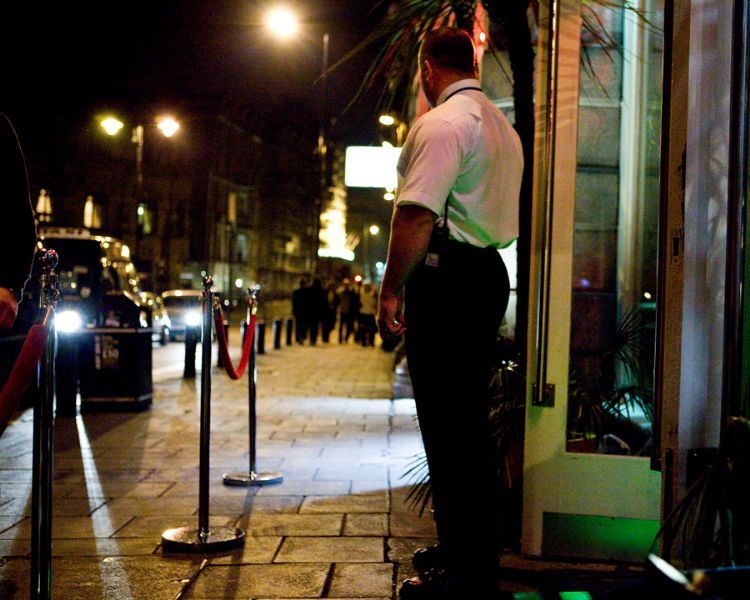 SKILLS
Despite being commonly perceived as massive, unintelligent guys, good Door Supervisors are excellent communicators who earn the respect of their guests. A good Door Supervisor is one who can remind a guest of the house rules without twisting any arms. You must be confident in order to avoid being provoked by angry guests, and you must always remain professional and firm. A good judge of character can predict a guest’s behaviour, before any problems arise. A military or police background isn’t a requirement, but would certainly be a great tool in finding a job, as well as dealing with any potential situations at work.
Physical fitness
Security work is known for lots of standing, movement, and the occasional physical altercation. You should be fit, but keep in mind that an employer may hesitate to hire someone that is too thin.
Interpersonal skills
It’s important to be firm and assertive so that you can control guests without the need for physical aggression. You must earn the respect of your guests, and the best way to do that is to be courteous and reasonable. Conflict resolution training could prove to be invaluable in refining these skills.