Posted by Spartan 24 Hour Security on Wednesday, June 5, 2013 Under: Cities Of The World
The Problem – Almost every city in Britain is disfigured by areas of idle, ugly wasteland. The Department of the Environment’s Survey of Derelict Land in England, made in 1993, showed the stock of derelict land to be 396 square kilometres and there is little to suggest that the problem has changed since then. This includes land “so damaged by industrial or other development that it is incapable of beneficial use without treatment”. It does not include land simply left empty and neglected. Nor does it include the derelict land of Wales and Scotland.

Why do we have these blots on our city landscapes? Is this land just surplus to requirements? Surely not, since office rents and the selling price of houses remain high in urban areas even in times of slump. Why do developers not rush in to build on these empty sites and take advantage of the market? How has it come about that in crowded cities where there are large numbers of people needing offices and factories to work in, houses to live in, parks, swimming pools, pubs and theatres to play in, land is wasted and left empty?

Change is of course natural and inevitable in the economic life of a community. Certain industries, like the cotton industry in Lancashire, fall into decline; passenger shipping is replaced by air travel and busy ports fall into disuse; urban sprawl can make an inner city area less convenient for trade because its roads are inadequate for an increased volume oftraffic. For reasons like these, factories, warehouses, customs houses, shops may become redundant. But economic change does not explain why these redundant buildings are not converted to other uses or pulled down for others to build something new in their place. Nor does it explain why empty sites are left to decay and become a magnet for vandalism and crime.

How does it happen?
The main reasons for this waste and neglect of inner-city spaces are land price inflation and land hoarding. When population is growing and industry expanding, land is greatly in demand and prices rise rapidly. Seeing this, owners of land hold on to it as an ‘investment’ for the future, waiting for its price to rise still further before they sell or rent. This action increases the scarcity and inflates the price. Anticipating a need for building land in the future, both commercial firms and local authorities acquire or hold on to land they may not need for many years because they believe that when they do need it, its price will have soared and be prohibitive to buy. This too contributes to the scarcity of available land and thus increases the price.

In times of inflation, people acquire land as protection against loss when money is losing its value. Even in times of recession, those with the means to do so buy land as the most secure of possessions; it cannot be destroyed and in time it is bound to be in high demand again, for land is a limited resource. No one can respond to increasing demand for land by producing more of it, and no human activity can go on without it. Waste land represents an opportunIty for employment forgone.

Land close to the heart of a city tends to retain a high value even when derelict. When a high outlay for reclamation has to be added to a high price for buying or renting the land, it becomes a serious discouragement to potential developers as they weigh up the cost and the opportunities involved in the regeneration of derelict land.
These causes of inner-city decay are aggravated by our system of taxation. The owner of an urban site who neglects it and leaves it to become an ugly, frightening place, a dumping ground for rubbish, a meeting place for drug addicts and drug pushers, is charged little or nothing in taxation. The owner of a similar site who clears it, makes it safe for human habitation, builds a factory or office block where others can find employment, is punished for his efforts by a hefty charge in business rates. Business rates operate as a check on development and reduce opportunities for employment.

Attempts to tackle the problem.
Since the seventies, successive governments have made strenuous efforts to tackle the problem of urban decay. Government offices have been moved out of London to less prosperous areas. Development and Enterprise Zones have been set up. New roads and motorways have been built and grants made available for reclamation. Local authorities have been ordered to sell certain sites and development corporations have been set up to simplify and speed up the planning procedures which have been a discouraging cause of delay and expense to would-be developers. Certain areas, like the Docklands in London, have been regenerated by such means, but others have, meanwhile, decayed further.
The problem persists. The main difficulty is that measures designed to encourage development put up the value of the land and in the long run encourage land speculation and land hoarding again. 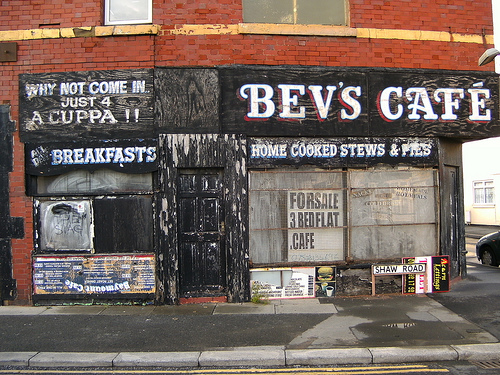 In : Cities Of The World