Posted by Spartan 24 Hour Security on Friday, October 13, 2017 Under: Door Supervisors
A doorman will very often have only a few seconds to weigh up a situation before they need to react in some way. Reacting in the correct way is obviously fundamental to being a good door supervisor – in order to do that, you need to be able to understand the type of situation that is occurring. 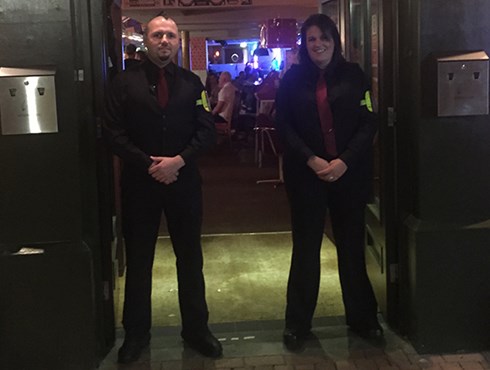 A good way to do this is to have a mental gauge of the various degrees of trouble you are confronted with. For example:
A level 1 situation could be a low threat incident where the patron is asked to leave and reacts calmly and obligingly. The rest of the party understands why the patron is being asked to leave and no issue is made of it.
2. Here the patron is calm enough, however they are more vocal. They demand to know why they are being removed from the premises, and try to argue their point. The patron’s friends may also attempt to intervene. However, this threat is unlikely to be physical and can be dealt with quickly without further issues occurring.
3.Here the patron may be acting verbally aggressive. They are frustrated at being removed from the premises and are making that well known.
The patron’s voice is raised and stress indicators are visible. This situation has an increased potential for turning into a physical altercation. The patron may be drunk and could act impulsively. In this situation the patron may already be fighting with another customer or door supervisor. Physical violence has already been reached. This is clearly the most dangerous of scenarios and a fast response is required. The patron will need to be ejected from the premises with appropriate force, and it is important to ensure that innocent bystanders are not hurt in the process.