Posted by Greg Willis on Friday, September 21, 2018 Under: Guest Security Articles
Armed security guards are afforded a variety of employment options in America. These guards are privately and formally employed by individuals or companies to protect people, assets, or property. Often, they are uniformed and armed in order to provide an official looking presence and deter criminal activity. 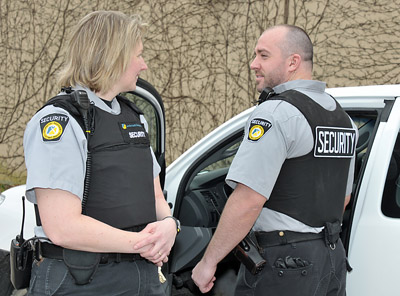 Armed security guards' jobs typically involve monitoring a predetermined area for inappropriate activity, fire, or property damage. This monitoring may be accomplished through direct observation or video or alarm systems. If a threat is detected, they are authorized to take appropriate action before alerting their employers or emergency response services, if necessary. Their main duties include interrupting criminal activity, emergency response, writing accurate reports, and other tasks specific to their various contracts.
Guards are not required to make arrests, but they are usually authorized to make citizens' arrests on behalf of police, sheriffs, or other authorities. Thus, armed security workers are trained in arrest and control procedures. This may include hand cuffing and restraint tactics. Other training often includes emergency response techniques, such as CPR.
In most cases, security guards are required to receive additional training before being armed. Many areas demand training and licensing for each weapon carried. This can include batons, firearms, and pepper spray. A security guard must be properly trained and licensed before beginning any armed assignment.
With an elevated fear of terrorism in America, is it no surprise that there is an elevated demand for weapons training for security guards in some areas. Many guards, for example, now receive bomb identification and response training. This increased training increases the value of armed security work, as well. Therefore, it is perhaps predictable that Arlington, Virginia, home of the pentagon, is the highest-paying American city for armed security workers.
These security guards often have degrees in Criminal Justice or Association of Applied Sciences (AAS) degrees. These post-secondary educated individuals tend to receive higher pay than those with no degree or a high school diploma. Eighty-eight percent of these security workers are male while just twelve percent are female. Some of the most popular American security employers are Securitas, Inc.; Allied Barton Security Services, Inc.; and the Wackenhunt Corporation.
National pay averages for armed security guards are as follows: $10.53 to $16.71 per hour. Overtime receives $15.37 to $25.63 per hour. Typical yearly bonuses are $202.92 to $1,225.00. These figures amount to a total salary of $23,971 to $40,641 annually. Many armed security guards go on to become security managers, security supervisors, or property claims adjusters. Any of these career advancements represents a significant increase in salary.